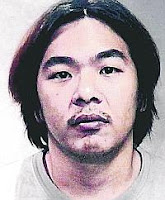 ST- April 29, 2007 Flirty Romeo, Porn Addict, Ruthless Rapist A charmer showed his terrifying dark side when he brutally raped three women in eight days
By Ben Nadarajan
HE IS one of the country's worst rapists, but shocked neighbours remember him as an amiable guy and a real charmer with the girls.
Ser Eng Siong raped and sodomised three China women last November, yet he never seemed to lack female company in his Shunfu neighbourhood.
Neighbours called him 'charming, friendly', a Romeo who changed girlfriends almost by the week.
One said: 'One was called Natalie, another Serene. Then there was Anna - so many we can't remember.'

Read more »
Posted by bic_cherry at 4:01 PM No comments: Links to this post