Jetstar Magazine and the compensation payable on intellectual property violations.

HOME > ST FORUM > ONLINE STORY
Jun 13, 2011
Beef up credit card security
TRANSACTIONS involving the physical use of credit cards with merchants continue to be prone to fraud.
Banks must implement a personal identification number (PIN) system for all credit cards, where the customer inserts the card into the terminal, either at the sales counter or at his table in a dining establishment, and validates it with his PIN.

HOME > BREAKING NEWS > SINGAPORE > STORY
Jun 13, 2011
Pedestrian fined for causing hurt to cyclist
By Elena Chong
A teenager, who stepped onto the road without looking and caused a cyclist to crash into her and die, was fined $1,500 yesterday.

Urine and effluent will feed the world

TODAY: Behind the Headlines
Urine and effluent will feed the world
by Esther Ng
Published on April 6, 2011
Urine is liquid gold, said Dr James Barnard, this year’s recipient of the Lee Kuan Yew Water Prize.
Half the world’s population cannot afford fertilizer, so it makes sense to use urine, said the 75-year-old, drawing laughter from a room of journalists who had gathered for the press conference.

HOME > ST FORUM > STORY
Jun 4, 2011
Delink political affiliations of grassroots bodies
I REFER to Monday's report ('PM: Unfair to criticise grassroots activists'). Being a grassroots volunteer myself, I could not help but feel that debating whether the grassroots activists are telling MPs the truth is just barking up the wrong tree.

Rules of prudence: Serving in a new era 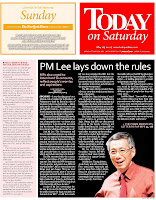 Rules of prudence: Serving in a new era
04:47 AM May 28, 2011
THIS letter by Prime Minister Lee Hsien Loong was circulated to all People's Action Party MPs and released to the media yesterday.

Our Party has won 81 out of 87 seats in the just concluded General Election. The opposition contested 82 seats, of which the PAP won 76, with 60.1 per cent of the votes.