Please lah, the CPI stats is produced by the very ppl who cause inflation. You must be damn naive to believe the inflation figures.

Its a open secret that CPI is many times lower than real inflation. You want real inflation figures, go MAS website, see M1 money supply since 2000. In last 12 years, SGD has lost 75% of value. 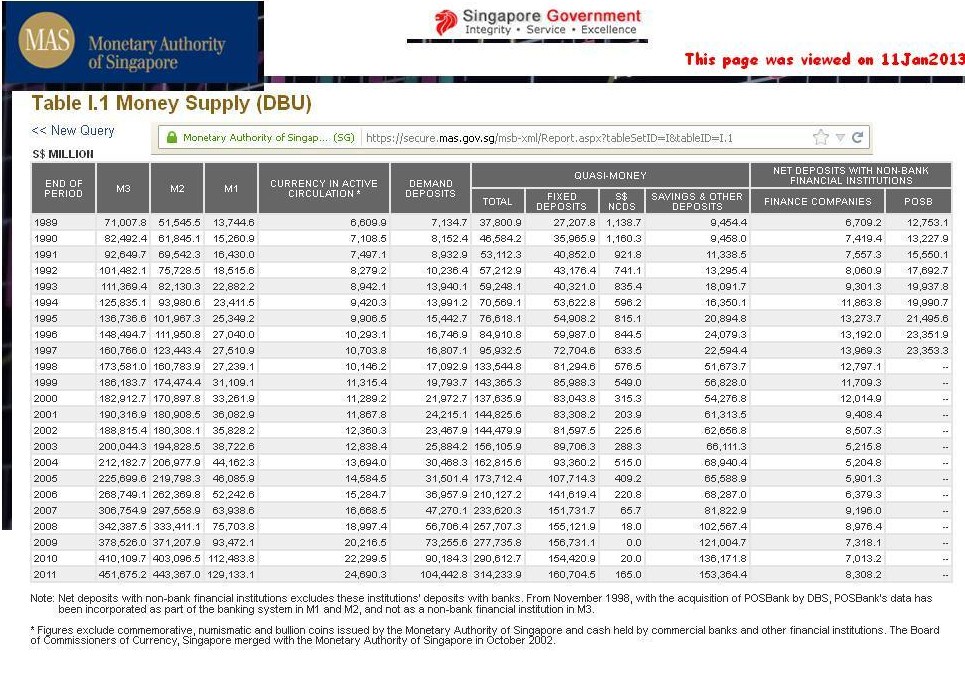 Singapore's monetary aggregates are compiled on an institutions basis. This is also the practice adopted by the U.K. and Germany. Under this approach, M1 and M2 in Singapore comprise only liabilities of the banking system, which includes the Board of Commissioners of Currency, Singapore (BCCS) and commercial banks. In M3, the net deposits of finance companies and, prior to Nov 98, that of POSBank are added. Hence, the definitions of these monetary aggregates in Singapore are as follows:
M1 = Currency in Active Circulation + Private Sector Demand Deposits with Banks
M2 = M1 + Quasi-money
M3 = M2 + Net Deposits with Non-bank Financial Institutions (NBFIs)

Following its merger with DBS, POSBank became part of the banking system. Hence, its deposits are treated like those of other banks and are included in the money supply as part of M1 and quasi-money.
As a result, POSBank's current account deposits are now included in M1 as demand deposits while its savings and other deposits become components of quasi-money and, thus, part of M2. In M3, Net Deposits with NBFIs now comprise only finance companies' deposits less their own placements of deposits with banks to avoid double-counting.
Another revision to the money supply statistics is the treatment of the net deposits of POSBank in M3. Prior to Nov 98, POSBank, like other statutory boards, placed part of its cash with MAS as term deposits. These deposits had been netted off from its gross deposits when compiling M3.
Following its acquisition by DBS in Nov 98, POSBank's term deposits with MAS are now included as part of money supply in line with the institution-based approach described above. In order to avoid a break in the data series and facilitate the analysis of monetary trends, we have revised the historical data back to October 1982 when POSBank first placed such deposits with
MAS.