Taxman claws back $3.2m from doctors after checks

Taxman claws back $3.2m from doctors after checks
Straits Times: 06 Jan 2013: Theresa Tan
Audits show that most doctors made errors in tax claims, and some meant to cheat
A doctor under-declared his income by $1.6 million over a six- year period and claimed that various family members were highly paid staff at his clinic.

The general practitioner managed to avoid paying $312,000 in taxes - until the taxman caught up with him. 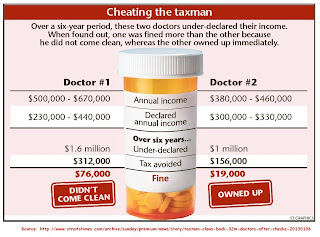 It is the largest case of tax evasion uncovered so far in an ongoing audit of doctors by the Inland Revenue Authority of Singapore (Iras).
The doctor reported an income of between $230,000 and $440,000 a year for six years, when in fact it was between $500,000 and $670,000. To lower his tax bill, he put his wife and other family members on his clinic payroll.
"While his wife had indeed worked at his clinic, some of his other family members helped at the clinic occasionally," Iras assistant commissioner of investigation and forensics Wilson Ong told The Sunday Times.
"One family member was holding a full-time job with another employer."
The doctor also stated highly inflated salaries for his family members, well beyond the market rate. And he tried to make claims for some expenses but was unable to produce the necessary receipts or payment vouchers.
He was fined $76,000 and also had to pay the $312,000 taxes he owed. His penalties were harsher because he did not give full disclosure when he had a chance to come clean, said Mr Ong.
Iras has completed in-depth checks on 136 doctors in an audit that began in 2009. It had flagged about 190 doctors for this audit.
Since 2009, Iras has clawed back $3.2 million in taxes and penalties from doctors alone.
In its last three financial years, it recovered a total of $143.7 million in taxes and penalties from 9,860 individual income tax cases audited involving people from a variety of jobs.
In its checks on doctors, it found that almost four in five made errors in their tax returns - many under-stated their incomes and some did not record sales properly.
While some may have erred out of ignorance or negligence, others clearly set out to cheat by passing off personal expenses, such as entertainment and insurance premiums, as business expenses.
Or, like the doctor who under-declared $1.6 million of his income, some claimed to pay disproportionately high salaries to family members who help out at their clinics.
Another doctor earned between $380,000 and $460,000 a year but reported only $300,000 and $330,000. In all, he hid $1 million over six years to avoid paying $156,000 in taxes.
Once found out, he had to fork out the taxes he owed and also pay a penalty of $19,000. He got off with a lighter punishment because, unlike the first doctor, he owned up when the taxman came knocking on his door.
Every year, Iras picks specific groups of self-employed individuals to focus on to encourage voluntary compliance among taxpayers.
In the last five years, its targets have included doctors, real estate agents, maid agents, tuition centre bosses, those in the food and beverage industry, public accounting firms, renovation contractors and those who run businesses related to beauty and wellness.
Mr Ong said Iras generally focuses on businesses with more cash transactions and poor record-keeping practices. It also acts when there are "discrepancies between incomes and assets".
Such audits have been done for many years but in 2008, it started making public on its website the targeted professions.
It also works with industry bodies, such as the Singapore Medical Association (SMA) and the Association of Employment Agencies, to organise seminars to educate taxpayers to file their taxes correctly.
The SMA spokesman said that among other things, it had organised seminars to help doctors understand their tax obligations, and it would continue to work with Iras to educate members.
Convicted tax evaders face a penalty of up to four times the tax evaded and a jail term of up to five years, among other punishments.
In the past decade, three doctors have been jailed for tax evasion.
The latest case involved an eye surgeon who was jailed for six months in 2011 and had to pay a $118,000 penalty.
She ran a clinic at Mount Elizabeth Medical Centre and deleted some of her patients' payment records to under-declare her income by about $150,000 over two years. This was to evade paying about $30,000 in taxes.
theresat@sph.com.sg
http://www.straitstimes.com/archive/sunday/premium/news/story/taxman-claws-back-32m-doctors-after-checks-20130106
==========