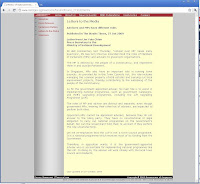 Letters to the Media
Advisers and MPs have different roles
Published in The Straits Times, 27 Oct 2009.
Letter from Lim Yuin Chien, Press Secretary to the Ministry of National Development
IN HER commentary last Thursday, ''Adviser over MP' raises many questions', Ms Sue-Ann Chia has misunderstood the roles of Members of Parliament (MPs) and advisers to grassroots organisations.


The MP is elected by the people of a constituency, and represents them in and outside Parliament.

In Singapore, MPs also have an important role in running town councils. As provided for in the Town Councils Act, this role includes managing the common property of HDB estates and carrying out local improvement projects, thereby contributing to the well-being of the people of the constituency.

As for the government-appointed adviser, his main role is to assist in implementing national programmes, such as government campaigns, and HDB's upgrading programmes, including the Lift Upgrading Programme (LUP).

The roles of MP and adviser are distinct and separate, even though government MPs, wearing their other hat of advisers, are expected to perform both roles.

Opposition MPs cannot be appointed advisers, because they do not answer to the ruling party. They have no constitutional or legal obligation to carry out national programmes on the Government's behalf. Nor can the Government hold them to account if they perform this role unsatisfactorily.

Let me re-emphasise that the LUP is not a town council programme. It is a national programme which receives most of its funding from the Government.

Therefore, in opposition wards, it is the government-appointed adviser who is accountable for implementing national programmes like the LUP. In doing so, the adviser will work closely with the local town council and residents.